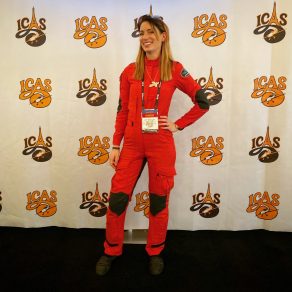 My parents couldn’t afford flying lessons. I joined Air Cadets and earned a scholarship for a private pilot license through them.  I attended Sault College to earl my Commercial License, multi engine and Instrument ratings and an advanced diploma in Aviation.”

I then became a flight instructor and aerobatic instructor in British Columbia. I haves taught on 48 different types of aircraft and flown 80 types.

I currently fly the Boeing 737 for a major Canadian airline.

I found many role models along the way including my fiancé Sean, who I met camping beside the runway at aerobatic competitions borrowing airplanes. He has been a coach and great friend through everything.

Sean recently proposed by having me flip the airplane upside down with a ring tied to a string on his parachute, so it flew up to eye level when we hung upside down. (in a Pitts S2E)

I also participate in competition aerobatics in the intermediate class in a Pitts S1S and am the President of the Aerobatic Club of BC, and Chair on Aerobatics Canada.

What do I do when I’m not flying? I enjoy training dogs. (mine knows how to fetch a beer from the fridge) art – painting, editing video for YouTube/Instagram (username Quotafiller)

I am proud to represent my sponsors:

The Vans RV6 is a homebuilt kit plane, modified to have inverted fuel, oil and recently added airshow smoke system. The engine is a Lycoming 360 180hp with a fixed pitch propeller. The aircraft’s top speed is 210 mph and it is rated +6, -3 G’s

This aircraft is a general aviation airplane leased from the owner who did HER private pilot license training in it I will be training her for her commercial license in it.” 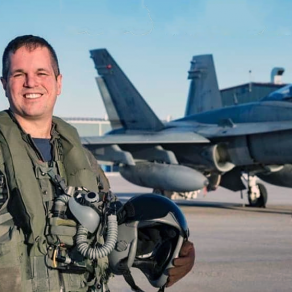 We are thrilled to announce that the RCAF CF-18 Demo team will be tearing up the skies over Vanderhoof this summer!

Meet your 2020 CF-18 Demo pilot, Captain Daniel “Delouse” Deluce! You can catch Delouse and the team this August 1st and 2nd, Right here in the ♥ of BC. Stay tuned for more announcements in the coming days!